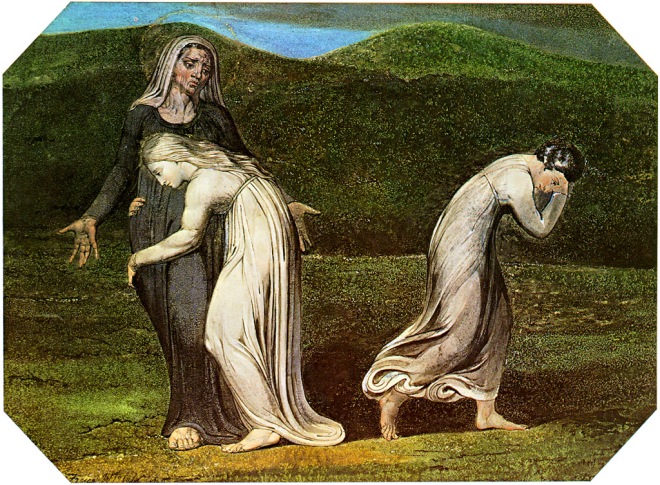 ‘Naomi entreating Ruth and Orpah to return to the land of Moab’ by William Blake, 1795. Image via Wikimedia Commons.

The other day I went to my local library to sign up for a Dutch speaking programme. I filled out the forms and handed them over to the lady at the desk. She checked over my answers and when she saw my surname she asked, is that a Czech name? No, I replied, it’s Hungarian. I didn’t think anything of it because I’m so used to people asking me about my name. Usually I’m asked if it’s Polish. No one, except Hungarians, guesses that it’s Hungarian, so the answer has become rote for me. No, it’s Hungarian. My grandfather was Hungarian.

Later on, as I replayed the exchange in my mind (it was entirely in Dutch so I was correcting all the mistakes I’d made or remembering words I’d struggled to recall), I also thought about my name. It struck me how strange it is that I have to explain my name so frequently to people. I suppose for most people it’s an unusual name or perhaps they just don’t expect me to have a name like Racz. I like that my name confounds expectations. I like that it forces these exchanges too, even if they seem so scripted to me.

I also like that my name contains the improbable story of a Hungarian man meeting an Irish woman in Liverpool and raising a family together in Manchester. I like that every time I am forced to explain my name, I feel closer to my grandfather, who I never knew and sorely wish I had.

In fact, all my names are stories of sorts. I have the same middle name as my Nana. I don’t know who gave her that name or why, but again it makes me feel closer to her and wish that we had had more time together. My first name is the story of my mum staying on a farm where there were two sisters called Naomi and Ruth. She decided then that she would have two daughters and call them Naomi and Ruth; an act of foresight that came true. Every now and then, someone will make the connection with the Biblical story of Ruth and her mother-in-law, Naomi.

Three small words, so many stories.